Charge your cell phone with a plant!

Energy is everywhere. This Barcelona-based startup developed a simple device allowing you to charge your cell phone three times a day with the power of the roots of a plant. The Bioo taps into the ‘biological battery’ inside the base of the plant. According to the company, all that is required from the user is to just water the plant and keep it growing, which will produce electricity both night and day without any harm to the plant itself.   READ MORE Vaginal dryness is a common byproduct of peri menopause and menopause. It is common and yet can also be acute. Vaginal dryness is also associated with life’s events such as childbirth, hormone treatments, medications, and stress! Harsh soaps and other chemicals can take away from natural moisture. Stress certainly plays a large part in keeping our system naturally lubricated. The delicate vaginal tissues become less plyable, and cracks may develop that can invite in infection and discomfort. An unhealthy lifestyle, pushing oneself to the max will can have manifestations in vaginal dryness. These can include lack of sleep, and rest, too much caffeine, lack of exercise and even negative thoughts and emotions. There is a direct connection between the relationship of emotions, positive and negative, and the sexual response in body, mind and spirit.

However with this amazing product, help is on the way: Aloe Cadabra can help to heal naturally. Know what is going into your body!

After all, look at the healing effects of Aloe Vera from the ancient times in Egypt, and also now. With these life events, the delicate vaginal tissue may become inflamed, irritated, with small cracks that can lead to infection and more dryness. Aloe Cadabra helps relieves the symptoms and the discomfort. It is natural feeling and moisturizing gently and naturally. The soothing, “awakening” of the tissues enhances sexual pleasure. It is 95% certified organic aloe vera, ensuring a soothing, pleasurable, intimate moisturizing experience! 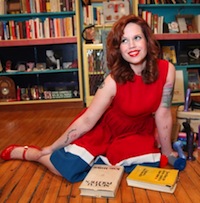 Sexpert Megan Andelloux is a certified sexologist and sexuality educator, accredited through the The American Association of Sexuality Educators, Counselors and Therapists and The American College of Sexologists. She brings sex-positive, shame-free sexuality education to college campuses and private workshops, and is a contributing author of several books on topics as diverse as sexual politics, sociological sexuality issues, and senior sexuality.

Ms. Andelloux recently visited Jaiya on her radio show and was asked, “Why do you think lube is important?” Her answer:

“I find that so many people, it helps them with sexual response. It helps them have an easier time having orgasms. It makes penetration so much easier.” Seriously. The right lubricant can make a big difference in helping moms maintain a fulfilling and pleasurable love life.  That’s because mothers have three extra challenges when it comes to maintaining their natural moisture.

Challenge #1:  Pregnancy, childbirth and nursing. All of these wonderful stages of motherhood have a not-so-delightful side effect: they can cause a woman’s estrogen level to plummet. The result: vaginal dryness. Sex during these times can be uncomfortable, even painful.

Challenge #2:  Stress. Having to manage kids along with a career, household, marriage, and all the other stuff in your life can be hard on her body and tough on her nerves. And stress happens to be one of the primary causes of vaginal dryness.